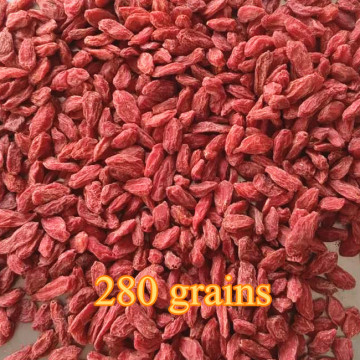 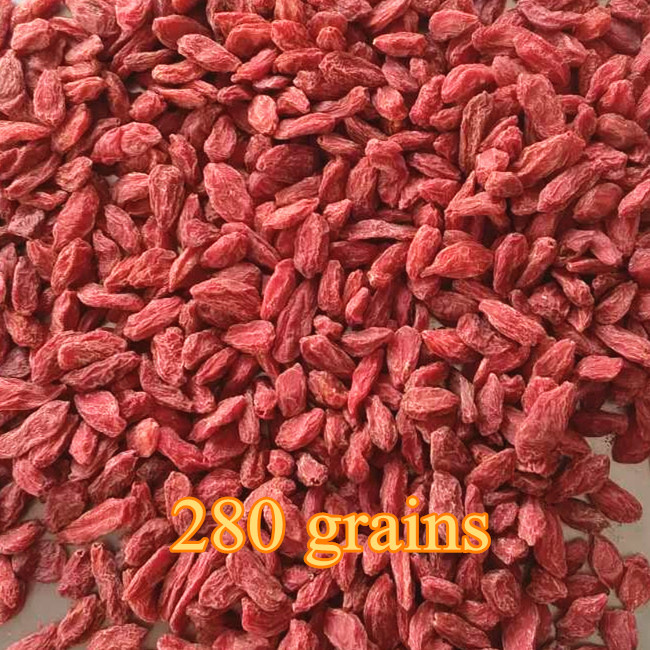 1.Goji has the functions of auxiliarylowering the blood sugar and blood lipid

3. Goji has the functions of anti-fatigue and antalleviate the physical strength

4. Goji has the functions of improving the microcirculation and boosting immunity.

About the pharmacological effects of Goji, the famous agrostography work of Ming dynasty Collected Works of Materia Medica has the following records: Goji can nourish the QI(life essence), replenish the blood, tonify Yang, replenish Yin, lower the liver fire, and dispel the rheumatism. Goji have many magic medical functions. 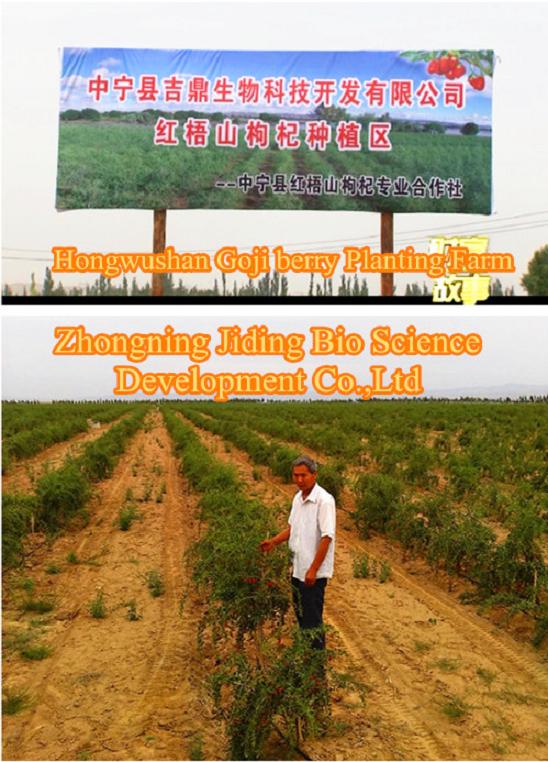 Hongwushan Goji berry planting farm, about 1000 mu lands,lies in Zhongning,Ningxia , Northern latitude 37 degreee , far away from pollution pest and heavy metal , irrigated by the one the famous river in China -Yellow River. We strictly conduct field management. With good quality, our Goji berry have been export to United States, Canada, European countires and so on. 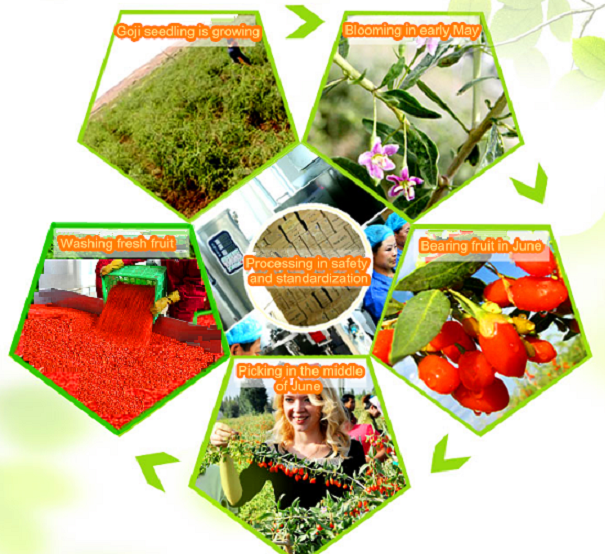 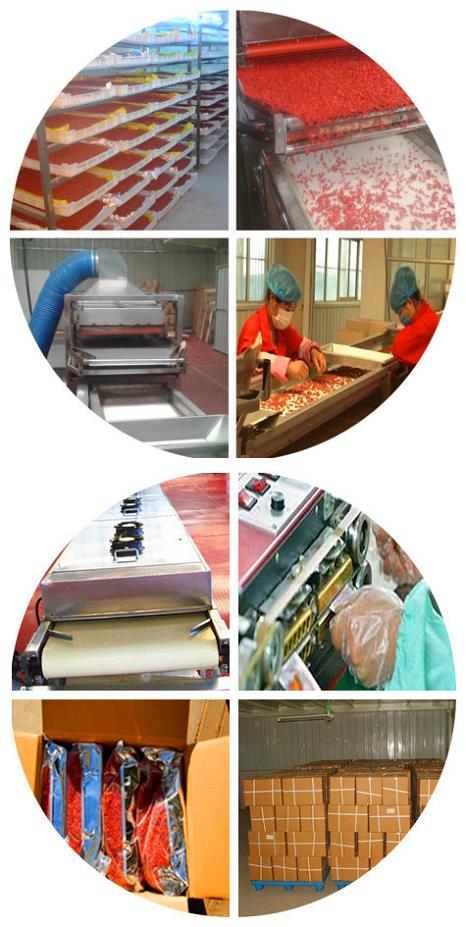 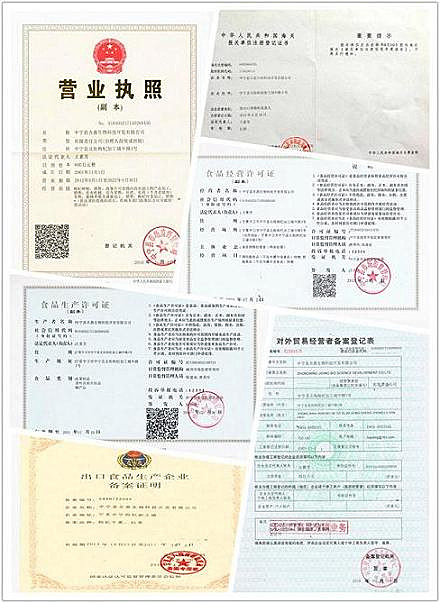 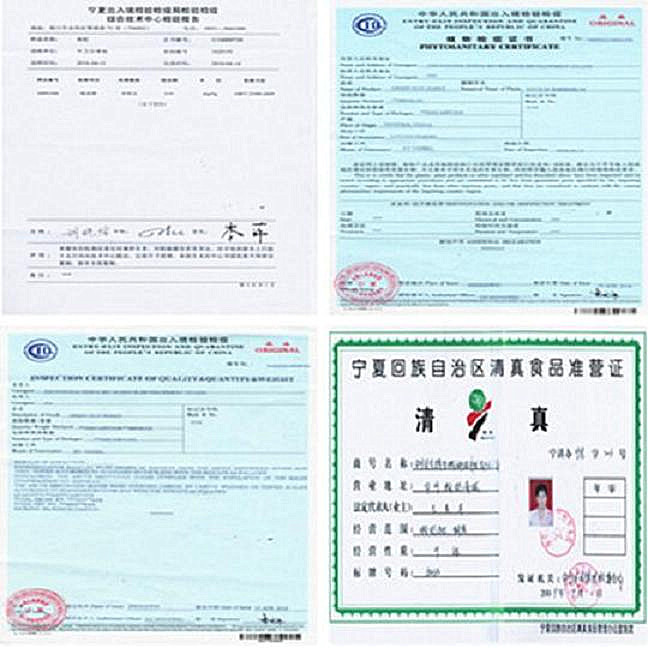 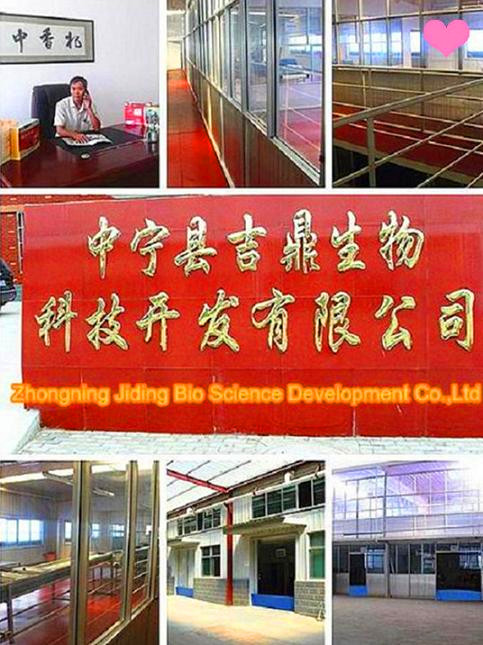 Zhongning Jiding Bio Science Development Co.,Ltd is established in 2001. It is a professional supplier of dried goji berry. The company locates in the hometown of Chinese Goji-Zhongning County of Ningxia province, China, which has been proved to supply only the best Goji berries with highest nutritional value in the world.

The company has independent import & export rights, registered in the US FDA. Our dried Goji berry has been continuously exported to US for 6 years. In Ningxia, we have an organic Goji production farm about 1000 mu, besides, we also established the other two Goji production farm in Qinghai province. The company`s dried Goji berry, has been adopted the advanced processing technology for secondary dried and degradation pesticide residue, get to the standard of directly edible.


Looking for ideal Goji Berry Manufacturer & supplier ? We has a wide selection at great prices to help you get creative. All the Dried Goji Berry are quality guaranteed. We are China Origin Factory of Factory Supply Dried Goji Berry. If you have any question, please feel free to contact us. 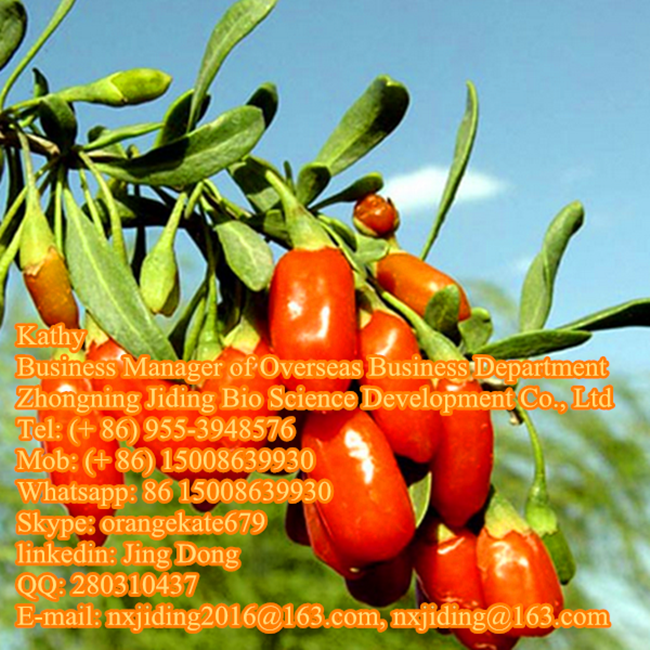 The Goji production farm of the company's organic food locates in Hongwushan sci-tech special commissioner entrepreneurship demonstration park of Zhongning county. The new variety of Goji plant, co-cultivated by the company and Wuhan Botanical Garden of Chinese Academy of Science, has passed through the new variety identification. The medical value, diet therapy & nutrition and health-care function of the new variety are much higher than the existing varieties, now is popularizing.

The company's dried Goji berry, is adopted the advanced processing technology[picking fresh Goji berry, cleaning, drying, stoving, screening, grading, removing impurities, sterilization and disinfection,vacuum packaging]. The company`s dried Goji berry has been continuously exported to the United States for 6 years, and exported to EU, Brazil, Canada, Japan and other countries. In 2015, the export volume of dried Goji berry reach to 320 tons(including the ordering quantity for export enterprises). The "CHANGSHENGCAO(longevity grass)" brand dried Goji berry produced by the company, carefully selected of authentic Zhongning Goji berry, applied for the advanced technology for secondary dried and degradation pesticide residue, get to the standard of directly edible; it is the ideal green food, suitable for the young, adult and old, it is also the ideal product of presenting a gift to relatives and friends.

Our company is creating the certification of traceable system from organic Goji berry farm, processing, marketing to storage link. Our company is also one of the first batch of pilot enterprises that re-listing Goji in the organic food ranks in China. The company is operating in good faith, adhere to the principle of "the personhood id berforehand". We meet the consumers' need by "real goods, fair price, high quality". To create a sweet tomorrow, we sincere welcome you to discuss the cooperation and common development.

Email to this supplier